Inoculate yourself against misleading ads put out by groups with vested interests in the status quo–those who do not want to see the billions of dollars they currently divert to their corporations redirected to provide health care. Improved Medicare For All is…

The last two phrases–Socialized Medicine and Government-run program—are “hot-button” terms like “one-size fits all” that DO NOT DESCRIBE SINGLE PAYER.Despite being repeated often by proponents of the status quo (and opponents of meaningful reform and cost containment, they have no basis in fact. THEY HAVE NOTHING TO DO WITH CURRENT U.S. PROPOSALS FOR SINGLE PAYER, MEDICARE FOR ALL.

Here we have gathered articles about Single Payer disinformation—whose goal is to sink proposals for significant health care reform and to prolong the Private Insurance Induced Stress Disorder (PIISD) many of us are experiencing. Opponents may say they are for “reform,” but reforms that maintain the abusive for-profit practices of the current corporate insurance industry will not be sustainable.

LEARN to DISTINGUISH FACTS from MYTHS

DON’T FALL FOR DECEPTIVE, MISLEADING LANGUAGE! We propose these materials to help you inoculate yourself against the misinformation being put forward by a group called “Partnership for the Future of American Healthcare” – a group of insurance companies, pharmaceuticals, hospital administrator groups, medical device makers, chambers of commerce, and others with HUGE VESTED INTERESTS in a status quo that funnels HUGE PROFITS into THEIR POCKETS.

●  Powerpoint on “Improved Medicare for All Myths and Facts” by LWV-NWMC, AZ, with the talk script to go with it.
●  “Fact Check on Claims by Opponents of Medicare for All”, Oct. 2019. Dr. John Geyman warns that “Corporate stakeholders and their lobbyists are pulling out all the stops in their own defense.” He outlines some of their false claims and counters them with evidence-based responses.” Read more..
●  A graphic on how lobbyists work on their behalf (and against your interest) Poster from Dr. Marc Sapir of “Mad as Hell Doctors” does a “fact check” to find the truth about the House Medicare for All bill, HR 1384 .

Here are persistent “one liners” from industry ads that are false.

“Does Anyone Really Love Their Private Insurance?” by Rachel Madley, Columbia Univ. medical student in the New York Times, 9-2019. She says “I am alive today not because of insurance companies, but despite them.” Don McCanne of PNHP introduces Madley’s article and provides commentary in his “Quote of the Day.”Read more.. (See also, an example “unlovable private insurance” below under monopoly pricing.)

Canadians Come to the U.S. for Health Care

The unsuccessful search for data to support this persistent myth shows that the numbers of Canadians who come to the U.S. expressly for medical care (i.e. not snowbirds) is “a tip without an iceberg.”

Read “Phantoms in the Snow,” a study undertaken to investigate the evidence for the claim that “refugees” of Canada’s single-payer system routinely come across the border seeking necessary medical care not available at home in a timely manner. In fact, the researchers found the number of such refugees to be infinitesimally small. Read more in this summary or the full report.

Medicare for All will be “One-Size Fits-All.” It Will Take Away our Choice of Doctors and Hospitals.

What “choice” do you want? Do you want a choice of insurance plans or choice of health care providers and hospitals?

Wouldn’t you want a “one-size-that-actually-fits-all” plan–one that covers ALL your health care needs, as well as everyone else’s, and costs less, OR do you want a choice between pamphlets and more pamphlets describing complex plans where you pray the one you gamble on will cover whatever needs you might have that year and will minimize your vulnerability to “surprise medical bills”?

By eliminating insurance companies’ limited “networks” of providers, Medicare for All would give you the freedom to keep your doctors or find new ones. You will no longer have to choose which insurance middleman you want to stand between you and your doctor. You would no longer have to choose between a multitude of complex, inferior plans which come at a higher price and offer less than Medicare for All. Under Single payer/Medicare for All, one plan will cover all your medically necessary care and will cover you regardless of where you are in the U.S. It will also cover everyone else around you so you will be less exposed to infection.

A 1963 study by Kenneth Arrow in the American Economic Review is the classic reference refuting this notion. Accessible at

Rather, in today’s climate, “Your Health Care is a Business Opportunity.” See article in Health over Profits newsletter Jan 2019. In it, an emergency room doctor asks the question, “People are afraid of ‘government health care’? Really, are you afraid of Medicare? I’m afraid of Wall Street corporate health and Big Pharma. I see every day the harm they wreak on our innocent [patients].”Read more ..

“Free Market Fails on Health Care: We Need Medicare for All.” USA Today, July 2019. Businessman and lawmaker David Steil says, “It’s time to accept that the free market doesn’t work for health care. Patients can’t do comparison shopping from the back of an ambulance.”Read more..

The Transition Needs to be Slow.

Medicare was implemented in just one year. President Johnson signed the bill on July 30, 1965. It was fully implemented by July 1, 1966 with 19 million individuals

(Note that in the COVID-19 pandemic, Taiwan, as of “35 days after the first 100 cases,” had the quickest and most effective response of all the countries in the world reported on by Johns Hopkins’ Center for Systems Science and Engineering. See more at these stunning interactive graphs at http://91-divoc.com/pages/covid-visualization/.

”The Public Option is a Poison Pill” by D. Himmelstein & S. Woolhandler, Oct 21, 2019, The Nation.Some Presidential candidates have been pushing it as a free-choice version of Medicare forAll. These doctors say, “That’s good rhetoric but bad policy.”….Read more..

SO-CALLED ALTERNATIVES CLAIMING TO BE “STEPS TOWARD”
MEDICARE FOR ALL

Remember as you read about the alternatives to Medicare for All that any plan that leaves insurance companies in place to perpetuate the abuses they have evolved over the last 25 years has lost the fight for cost containment. The Affordable Care Act of 2010 is one example of a reform whose cost-containment measures were postponed or eliminated by its opponents before they could be implemented.

A bigger website, from David Belk, MD, explores in great detail how what would in other contexts be considered collusion and price fixing are standard practice in the health care industry and have over 20 years “exploded healthcare costs” in the United States.” Read more… https://truecostofhealthcare.org/

“Healthcare Claims Processing” by Henry Broeska (June 2019) is a grim reminder of the non-medical expenses built into the U.S. system, adding 30% or more to our every health care expenditure. Broeska illustrates the crushing weight of administrative waste seen throughout the American insurance “non-system” in two contrasting “flow-charts.” Read more..

Surprise Medical Billing – Has this happened to you, or someone you know? You’ve checked that the hospital you’re going to for your operation is “in-network,” you’ve cleared it ahead of time with the insurance company, but one part of the operation (for example, your doctor is assisted by another doctor who installs a valve during open-heart surgery). This is a doctor you have not met and know nothing about–until you receive the bill from an “out-of-network” provider. See commentary from Kaiser Family Foundation. Read more…

If you’re lucky, it’s just a close call, as in this New York Times article, “My $145,000 Surprise Medical Bill.” The author says, “My brief glimpse into the financial abyss taught me about the American health care system–one bill could wipe us out.” Her bill was an error that she fought successfully to have corrected,but medical bankruptcy is common in the U.S. and nowhere else in the world.Read more..

Since 2013, it’s only gotten worse. Business Insider(June 2019) reports that medical bankruptcy was up to 67%.

Note: There is no surprise billing in Medicare for All — 1) no networks, so you can’t be “out of network,”2) transparent pricing, 3) and a democratic process required for raising rates.

Her friend reports this instance of OVERCHARGING: Although some insurers will pay for needed emergency care at the closest hospital—even if it is out of network…the hospital and the insurer may not agree on a reasonable price.” If the insurer thinks the hospital is charging too much, and the hospital won’t budge, the bill goes to us–the patient.

In April of last year, this friend thought he was dying. A heart attack had pinned him to the floor of his bedroom. Luckily, his neighbor took him to a Medical Center nearby, where he was successfully treated. Weeks later, he received a bill from the hospital for almost $109,000. The hospital was out of network on his insurance, and Aetna had only paid about $56,000 of the total of $165,000 bill for his treatment.

Here he was, trying to recover, but spending hours on the phone fighting to get the insurance company to cover what was in his contract with them. Ultimately, the local TV station got involved and found that the hospital was over-charging and the charge was greatly reduced.

Why did the hospital finally agree to cover the more than $100,000 cost? Was it purely because of the bad image caused by media coverage? Or is it possible that the charge was so high because they can usually get away with it, but they happened to get caught this time?

In this tragic example, we can see the anguish caused by the callous for-profit hospitals that have replaced so many of our safety-net hospitals 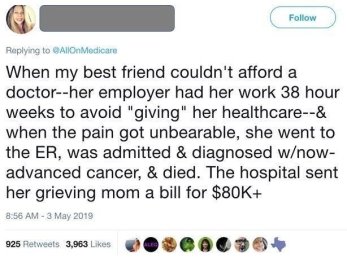 Privatizing Medicare Under the Radar, with so-called Medicare “Advantage.” Marc Sapir, MD, shows in a short powerpoint how Medicare Advantage plans let private insurers game the Medicare system by “upcoding” and other fraudulent practices, and then leave taxpayers to pay for the added expenses.Read more..

These articles provide a template for deliberately misleading the public on the arguments about Single Payer Health Care Reform. They were devised by people who are FINANCED by people and corporations with BIG VESTED INTERESTS in the status quo. Advocates need to inoculate themselves and their audiences against these arguments.

Congressional Budget Office May 2019“Key Design Components and Considerations for Establishing a Single Payer Health Care System.” In the estimation of the HCR4US network, this document shows how easy it is to mix misinformation in with true statements to give the misinformation the “air” of truth. The explanations may sound clear, and readers may find the outline of the issue they provide to be helpful. However, persistent treatment of assumptions as facts end up distorting the picture. [We have inserted comments to point out some of the most egregious mis-statements. See for yourself what you think.]

These are industry created and supported “movements” that purport to represent the insured, but in fact are mouthpieces for the INSURERS. For example, Coalition for Medicare Choices  https://medicarechoices.org/  This group promotes Medicare Advantage, which is a more expensive solution that delivers fewer benefits to fewer people than Improved Medicare for All and is a likely obstacle to the establishment of a better system. The website lists about 35 health organization partners, which seem legitimate, but at the bottom, in fine print, we see “Powered by ahip.org” America’s Health Insurance Plans.”

Health Care Reform for the US